To investigate a suspicious death at a winery, the team tries to get at the new owner through his wine collection.

Kristen Knox, whose father was a laborer in a wine field until dying of a heart attack while in the field. She was offered a $1 million settlement, on the condition that she sign a non-disclosure agreement, which prompts her to seek the team's help.

Frank Madigan, who has a history of worker fatalities in his fields. 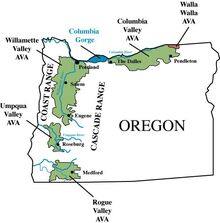 This episode is set in the Oregon wine country. Following on the ascendance of the California wine industry, Oregon began to rebuild its wine industry in the late 70s. By the mid-80s, a group of wineries had begun to garner attention for their premium wines, particularly their Pinot Noir, vinified from a finicky grape that does not grow well in California but flourishes in Oregon.

Currently, there are over 300 wineries in Oregon, many of them in the wine growing regions hugging the Willamette and Columbia Rivers. The finest Oregon wines are regarded as on par with the best of those produced in California and France.

The team seeks to make Madigan think his own rare wine collection is worthless, focusing in particular on a 200-plus-year-old bottle purported to have been owned by Thomas Jefferson.

Retrieved from "https://leverage.fandom.com/wiki/The_Corkscrew_Job?oldid=16780"
Community content is available under CC-BY-SA unless otherwise noted.